TO ALL MY ADORING BLOGGING FRIENDS, FOLLOWERS, AND FANS IN JAPAN TO WHOM I DEDICATE MY SATURDAYS AND SOMETIMES OTHER DAYS BECAUSE I LOVE YOU ALL.

Well now, My Dear Ones, here I am. I, your Mary Ann-san, am just as anxious to write my latest Blog for you — #99— as you are to read it. I have been waiting nearly all day to write it and I deeply apologize to you all for my lateness because it is nearly 24:00 for you already going on my phone clock here. I will try to finish before then though. Let us hope for the best. And knowing that I still have not yet had any Supper yet, we must try. Happily, I shall write. I hope you will enjoy! And do not worry, My Dear Ones. My Supper will wait!

When last I was here, and you were all reading this, I had made the discovery of my BABY BRACELET and yet I thought it not to belong to me, because it had another person’s name on it, so it couldn’t be mine could it, even my Poppy said it was, insisted it was and so then saying he had something to tell me, he told me also to bring the BABY BRACELET from the CHEST with me.

Who was I, his Catbird, to put up a fuss? My POPPY had something of great importance he wanted to tell me and I wanted very much to listen so downstairs we went to sit at the kitchen table.

For the first few minutes we sat there, neither of us said anything. As I held the Baby Bracelet, I could see from the look my Poppy gave me this conversation was not going to be an easy one for him to start. He sighed a huge, sad, sigh. Something told me he had something he needed to tell me but he did not even know how to begin. He was at a loss for words and I couldn’t even help him begin to get them out. Pushing the Baby Bracelet across the table toward him as if to say, Well, say something, wasn’t helping matters either.

The Baby Bracelet sat there in the middle of the kitchen table as though it had a mind of its own and had it a mouth of its own, it most likely would have threatened my Poppy that if HE did not say something to begin the conversation and to tell me the whole entire truth in one way or another, IT would.

I looked at the bracelet and then at my Poppy. Still waiting. Still wanting to listen.

Finally I said, I am listening Poppy. I’m all ears.

Again, came the huge, sad, sigh from my Father only this time it was longer. I wiggled in my chair trying to make myself comfortable while wondering just how long this conversation was going to take. I settled down.

My Poppy opened his mouth but no words came out. He then shut it again. Suddenly, I couldn’t understand why my Poppy was having such a difficult time trying to explain to me about a Baby Bracelet that had someone else’s name on it. Why didn’t just say, it wasn’t really mine, and go on from there?

I guess the reason was because he kept insisting that the Baby Bracelet with the strange last name on it was mine, and that was what was making it hard for him to form the words he wanted to but could not bring himself to say.

At last, he said: Catbird, Mary Ann, honey. The Baby Bracelet IS YOURS. MONTAIGNE is the name you……had when you were born. It was an alias from ME. Montaigne was a name I was using at the time of your birth. When I married Mommy that was the name I was using. I was AWQL from the Army and The FBI was looking for me. I was running from them. And they would not have found me…….if I had not made an phone call to your Mommy. If I had not made the phone call to your Mommy, your maiden name would have been Montaigne I guess. But afterwards, when you were still very young, we went and got my name changed back to what is now. So, your maiden name really is : STANLEY. Not Montaigne. And it was changed back to Stanley on your birth certificate. Same as your Mommy’s and mine.

Where did the name Montaigne come from? I asked.

Montaigne is ……was……a French author, my Poppy said, I have his book upstairs. (It was true, when I was upstairs in my Poppy’s bedroom one day, looking, not long after our talk, yes, I found it).

A thought suddenly crossed my mind.

You mean, I said, that when we were at Nana’s Thanksgiving table and she mentioned the name of……….of….her gardener’s first name…..she did not mean her gardener, she meant…….you?

But that was YEARS after……after…….I said.

And Nana continued to call you by her gardener’s first name even after our names were changed back?

After our talk was finally over, my Poppy, who was by that time, crying, asked my forgiveness. And I got up and hugged him very, very, tightly. And told him I loved him. And that of course, I forgave him.

It would be years later, after my Poppy had died, that I would learn that my brother, who was born five years before me, was born and had died with the Montaigne name but that his gravestone has another last name on it. His middle name which is/was my Nana’s married last name.

It was also shortly after this that I found myself totally immersed in anything I could get my hands on to read about The FBI and to watch any show that involved them—fiction or not.— and there were plenty of them on at that time. I even read about (the now late) Director J. Edgar Hoover. I could not read enough and when he died, I sent flowers to his funeral. And know they got there cause I knew which ones they were cause I saw them on television. I knew they were MINE.

Have I always been interested in Police Work? Yes. Always. And I guess I always will be. And why I will always have a very HIGH respect for The Police. And why I am always drawn to Police Shows on television (now HULU on the Internet). The old shows like DRAGNET, ADAM-12, and HAWAII 5-0, and new ones like BLUE BLOODS. If it involves such things, I am on it, as they say.

But now, at almost 70, I do not know what my future will bring yet for me. Continued good things I hope. Great things. Even though I still remember wanting to take Journalism in school, until I discovered I would rather write stories than report on them. And secretly dreaming of police work as I still do sometimes today.

In closing I would like to thank OUR Police Officers here in Hawaii and all Police Officers here (Hilo) and in Japan, and Britain and Scotland, where I often have daydreams, and around the World, for all the wonderful work they do as they put their lives on the line every time they go out to do their jobs to keep us all safe. May God Bless You All.

With My DEEPEST RESPECT, and LOVE,
Aloha,
Your Most Devoted,
Mary Ann-san 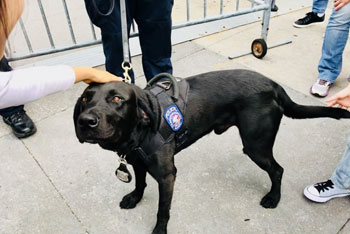