To All My Caring Blog Readers In Japan !!!

Hi. It is I, your Mary Ann-san. You have all been so patient. This is Part # 6 of Medieval Games. The last part. I am almost sorry that this is the last part to this Blog Mini-Series because I have enjoyed writing it so much. I just hope you have enjoyed the reading of it. Thinking of you and thanking you for reading!

The day finally came at last when my Father and the Chess Teacher met face to face. He introduced himself as Mr. C. and my father said he was Mr. S.

“I understand,” Mr. C. said, “that your daughter here, she wants to join our Chess Club and that she does play Chess?”

My father replied in the affirmative and added: “I have no doubt of her ability.” when Mr. C. said: “But Second Grade? Mr. S., she, your daughter, if I allowed her to join us—she would be going up against fifth and sixth graders.”

Finally though, Mr. C. instructed his entire class to “clear their boards” and we walked over to where a young boy sat and I was told to please sit down across from him—and set up The Board, putting the Chessmen in their proper order—both the white and black pieces while the entire class watched. Perhaps Mr. C. doubted somehow that my Father had not showed me how to accomplish this feat while he was teaching me the ways and the rules of THE Game—and so—I would immediately fail at this. I mean, if I was unable to even set up The Chess Board, how could I possibly play The Game?

Everyone watched; including my Father and Mr. C. All were indeed watching in silence. Even the boy across from me.

When I had set up The Board, Mr. C. introduced my Father and I to the young boy across from me.

:This is Charles—my son. Mr. S., your daughter, Mary Ann, will play a Game with him. He is in the fifth grade.”

Mr. C, couldn’t have been any prouder when he said this, but especially when he added that his son was going to be in The Chess Tournament—one of five boys chosen to be so in his class. And then there seven sixth graders chosen from his class to be in it too.

Because The Game between Charles and I had taken nearly two hours to play and everyone had sat and watched, or stood and watched when they couldn’t see good enough, Mr. C. suggested at last, when it was over, because he had a meeting to attend now and could stay no longer, we should all get together tomorrow for one more Game. At that time, The Game would be between myself and a sixth grader—as it turned out—one of the seven sixth graders who was also going to be a participant in the upcoming Chess Tournament just as Charles would be for his grade. In this we all agreed. The Game between myself and the sixth grader, T.Q., the best player in Mr. C.’s class and The Chess club, would be held the following day after school was done because it was Friday. Everyone couldn’t have been more excited! It was almost as if T.Q. and I would be in a special tournament all our own!

Friday couldn’t come fast enough for any of us. My Mother, of course, refused an invitation to come, calling her husband’s Game which I had been patiently taught, “an exercise in stupidity” and that surely there were much better things to do with one’s time. But what those “things” were, only God, and she, knew.

At last T.Q. and I sat down to play—wishing each other good luck. And T.Q. and I were there for nearly four hours. Except for a single bathroom break for each of us to use the school restroom nearest to the bungalow.

In the end……no……I did not get a trophy for either Game I played.

I received an even deeper respect and an even more deeper love for my Father as well as a sense of accomplishment—and something else…………………I got to join Mr. C.’s Chess Club…….knowing at that time…………..that in three years I would finally be old enough to participate in my first real Chess Tournament.

I got all this because I did WIN my Games—BOTH of them—-in the ONLY WAY I KNEW HOW.

By concentration, patience, honesty, by having a deep love for The Game……….. 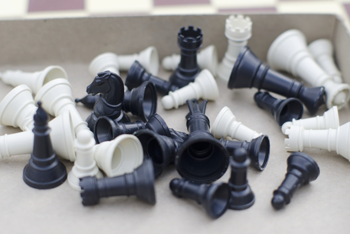