TO ALL MY BELOVED BLOGGING FANS AND FRIENDS IN JAPAN!

GREETINGS TO EVERYONE! TO ALL MY SWEET LOVES AND DARLINGS AND FOLLOWERS OF MY WEEKLY BLOGS.

You almost did not get a blog this weekend. This is the final weekend of Summer but that was not the reason. Hilo had a total Black Out a little while ago. No power, no lights, no nothing for over an hour. The power just came on about half an hour ago so things are okay.

Anyway, I hope you will enjoy this blog. Due to a miss-count on my part, this Blog is #132 and Part #15. No one missed any parts or blogs, I just somehow did some miss counting somehow. So sorry. Everything is okay so enjoy.

The very early 1980’s had us leaving The Del Mar Apartments and down near the Industrial Area for our latest move. This place was close enough to my job that if Tony wasn’t home when I was done, I could walk there so it wasn’t too bad. Except I was tired by the time I got there. However, it was good to walk sometimes. But most of the time Tony was home and would come and get me.

The only thing I did not like, was my landlord. Tony didn’t care for him either because he was very nosy. No, this landlord (Mr. Kaide—long deceased now), was a different kind of nosy. Not a nosy-lani like Mrs. Kang was, but nosy in another way. He would come into the apartments and go through the tenants things when he knew they were not home. He would also leave NOTICES under tenants doors with regard to: The Fourth of July and New Years Eve! NO FIREWORKS ALLOWED. One day we caught him at it. That is Tony did. And not long after this, Mr. Kaide somehow had Tony set up, if you know what I mean. And this got the police involved. We won. And Mr. Kaide left us alone.

Tony and still had our fun on New Years Eve and went out and partied and had a good time. But one New Years Eve came and I got sick and we couldn’t go out. All I had was a little cold and I could not see WHY Tony put his foot down and said we were staying home that year. I was truly mad about that. I mean, New Years Eve only comes once a year and it’s a BIG PARTY NIGHT! And I wanted to go out. But Tony said, nothing doing. We were staying home. We could go out next year he said.

It went without saying that I was NOT THRILLED. I was SUPER PISSED OFF REALLY BIG. When Tony tried to talk to me, I ignored him and like walked away. I had nothing to say to him. I couldn’t even enjoy our New Years Eve supper I was so mad. Time passed and it got later and later and finally I just decided I should give it up since we weren’t going and to just go to bed.

Besides: it was almost midnight.

What could I do? Tony said a word he did not usually use. It was the word : please. So, I came outside.

It was cold outside, but the cold felt good to me because of my fever. We stood next to each other, and Tony said: LOOK and pointed straight ahead. At first I saw nothing and said: Where? Then I looked again and saw beautiful fireworks going off in the sky. Fireworks we probably wouldn’t have seen if he and I had gone out to the big hotel for drinks and partying and dancing.
We would have probably only heard them. But they sure were pretty.

And now it was midnight: And I got my New Years Eve/Day Kiss. Just what I secretly wanted. Now I could go inside when the fireworks were over and go to bed. And Tony would follow me. In the morning we would celebrate with the wine we didn’t have tonight cause I had been so mad.

In the morning, I would feel better.

And it would be another NEW YEAR.

Aloha Everyone!
Your Dear Mary Ann-san 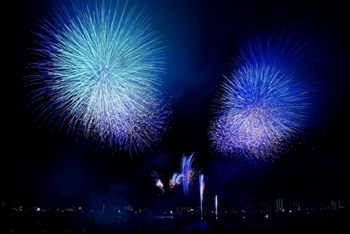