TO ALL OF MY BELOVED ONES IN JAPAN, MY FAITHFUL FRIENDS AND READERS OF MY BLOGS !!!

My Dears, My Darlings, My Sweets, And All My Faithful Ones !!!

I am here with you unexpectedly I know, and way before the weekend when this Blog—#140 (B) is supposed to show up and be due on Hitomi-san’s Home Page. But My Dear Ones, I feel the best thing to do is get it done now before the time arrives and I will not be able to write it and you will all have to wait until I can. This will most likely be my hardest Blog to write so please try and be as patient as you can with me. Blog #141 will probably be just as hard. We will see. Anyway My Darlings, I now begin Blog #140 Part 21 (B). Peace Everyone.

The rest of the day of the 8th of September went slowly. In fact it just dragged along after I spoke to David and promised him I would call if anything changed. The day was one where each minute was the longest ever and felt like a year. I spent as much time as I could in the bedroom with Tony, checking on him, making sure he was okay. Talking to him. Just needing to be with him and wanting him to be as comfortable as he could be and praying for him.

Praying for Tony was especially hard that day because I hated that darned hospital bed and I knew what it meant and I wanted to Tony to stay with me. I definitely wasn’t ready for him to go yet. I needed him here. While I was praying for him I asked him if there was anything I could do.

He said: Please make the pain go away.

There was that word. The one he hardly EVER USED. The word PLEASE.

My poor Tony. I told him that I couldn’t make the pain go away. I was NOT GOD. But I would pray to God and ask Him to take the pain away so that my Tony wouldn’t hurt anymore. And I prayed as hard as I could. I mean I prayed so hard, tears came. My Tony’s life had been very hard. Nothing had come easy for him. Nothing.

My Tony had dropped out of school at the 8th grade just so he could help his parents at home. He went looking for work which wasn’t easy either at that time. (He was born in 1917 remember ). But he went to places every day and if they chose you to work, you were lucky. My Tony made 25 cents an hour at that time. In Tony’s time, this money, as little as it is to us now, it went a long way. In my Tony’s era, you could get into the movie show for a dime. And you could get an entire meal at the place where they sold sodas — the meal complete with things like mustard, mayonnaise, pickles, catsup, and other things— for 15 cents. In his time a dollar could get you a lot. Even penny candy. And his work was hard, real hard. In his time you worked on the docks and other places doing extra heavy work that no one should have to do. Jobs were hard to get and hold then.

So, shouldn’t God at least make his pain go away for him since his life had been so hard? We thought so.

But the pain from the Stomach Cancer stayed. And Tony refused to let me see it in him. He was trying to stay the strongest he could for me.

When he got thirsty, I gave him as much water as he could take, in spite of what the doctors had told me because it was what my Tony was asking for. Water. Even though after awhile, he couldn’t even keep that down and had ceased eating. And yes, the nurses were still here. They weren’t with me then though. It was my Tony and I alone in the apartment.

The day passed to early evening and then I decided I should go downstairs and wash our clothes. I told Tony that was what I planned to do. It was around 7 p.m. I came back up while the clothes washed and checked on Tony and he seemed fine. A bit later I went down and put the clothes in the dryer and came back up again. Tony was okay. Then back I went after the dry clothes. I put the laundry basket full of clothes on the floor and looked at the TV. I had SUPERMAN on at the time and the actor Dean Cain was starring in the series as Superman. At the time I looked at the television screen, Dean Cain was in a jail cell, where he had been put by Lex Luthor and he was laying in one corner of it hardly able to move. In the other corner was this huge green rock — the only thing that could kill Superman —- and Superman lay there dying. And without thinking I said out loud: “Oh, look Honey,” as though Tony were in the room with me, “Look! Look! Superman is dying!”

I went completely silent staring at the screen.

I had no idea at that moment MY SUPERMAN WAS DYING !!!!!!

Something suddenly made me move and I went into the bedroom to check Tony. It was 8:45 P.M. I checked him and there was no response. I tried to remember what the nurses had said. If he is unconscious he is still breathing. But how could I tell? Then I remembered! Get the mirror. Check using the mirror. I did the check. I checked for a pulse too.

Now while all this was going on, I have to explain something which is also a part of this. I will get back to what has to be said in just a minute.

I had these neighbors living next door to me in Apt. 17. And they were worried about me. Especially the wife. And on the night of the 8th of September, the woman’s husband, had a ball game he wanted to go to and his wife asked if she could go too. And he had said : You hate the game. Why do you wanna go? In the end, they went together but the thing was, the game had hardly behind when she had said to him that they had to go home and they had to go NOW. The husband couldn’t figure out why. She said: Mary…..Mrs. Feola is in trouble. She needs us. We have to go home NOW. I’ll drive. So drive she did.

Now, in the mean time, I had called the nurses. I politely said on the phone if they could please come out. I said, I think my husband is gone. But I am not sure. Could you please come?

They were more sure than I was.

My Tony was gone.

The nurse I was with took me into my second bedroom and tried to reassure me.

But the nurse could.

She said softly, “Yes Dear. You are now a Widow.”

She held me while I cried big time. Then I realized I had two phone calls to make.

The first one was to the 911 and the Police. I was very calm. When I got the Police on the line I said, that I would like to report a death at my house. My husband has passed away. Could someone come out?

The tears were coming down my face but I forced myself into silence while I was on the line and as the police said they would send someone. I gave them my address and hung up.

By then, my next door neighbors came home, the wife saying, “See? See? I told you that Mary was in trouble!” When her husband asked his wife how she knew she said, the nurses are here and they do not come out in the middle of the night unless something is terribly wrong!

When they came flying up the stairs to check on me, I was sitting on the couch. They came in asking after me. “My Tony’s gone.” I said. “He’s……dead.”
I don’t know how I managed to say those words. They took forever to say.

They said that they were sorry.

Then I remembered I had to call David.

I looked at the clock. It was now after nine p.m. and I had turned the television off. Damn that darn time difference I thought. It was well after midnight in California, in Lakeport, where David and Vivian were. Damn.

I picked up the receiver and punched in David’s phone number, listening to it finally ring. And ring.

I said: “David. I am sorry to wake you. It’s me. Mary. You said to call you if anything happened. If there was any change.”

With great difficulty, I forced the words I out of my mouth that I did not want to say. The hardest words I ever had to speak in my entire life.

“David…..” I said, “Your Dad……” I swallowed hard and then forced myself to continue. “Your Dad……died tonight. Just a short time ago.” I told him what time.

David then said after a lengthy silence on his end, “Just a minute. I don’t want to wake Vivian. I am going into the parlor.”

I waited on my end of the line. I could hear him going from their bedroom, into the hallway, past the dining table, into the parlor. Unlike now, at that time, I could hear perfectly.

We talked for awhile.

Finally the police and the medical guys came ready to take Tony out. David and I hung up at last and the police talked to me and got me water that I didn’t really want at that time but probably needed and so I forced myself to take some.

After they took Tony away, I stood on the front porch for a long time looking at the place where they had been parked. I am not sure how long I stood out there but when I was getting ready to go back in my place, the people next door in Apt 17 came out and urged me to stay with them. They didn’t want me to be alone. I told them I was fine. But I stayed with them a little while anyway.

Later on I returned to my apartment 18, to my empty place, where the hospital bed was, now empty, my beloved Tony no longer there.

I was now totally alone even though I could feel my Tony’s presence still in the house.

I was now Tony’s widow. 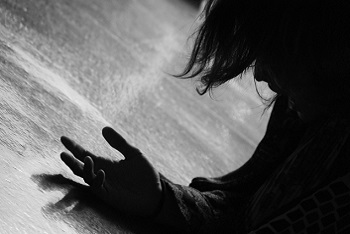