TO ALL MY FANS IN JAPAN WHO LOVE MY BLOGS SO MUCH THAT YOU ARE STILL WITH ME DURING THIS PART IN MY MINI-SERIES.

Oh My Dear Ones !!!
You have all been so patient. This mini-series has taken me so very long to write and we still have a ways to go yet. And still this Blog is really hard for me to write so please try to be extra patient with me. Writing a Blog such as this one is not an easy thing for me to do and yet it has to be done other-wise the mini-series l have taken so much time to write up won’t ever get finished the way it is supposed to. So, we shall do it now.

Even though I had wanted very much to wait, the choosing of my Tony’s casket had been quite an upsetting event for me and I was certainly glad the horrible ordeal was over. I tried very hard NOT to picture Tony laying in it. After all, he was ALIVE still. And I was taking care of every spare minute I had left in my heart to keep my Tony here. And David and Roger had been so patient. I knew that at one point Roger had ask Red David if we had . the casket finally and David said yes. I did not hear them talking but I could tell that they had. You could not miss something like this.

At the end of August, Roger returned home to Nebraska where his wife Marilyn was waiting for him and waiting for news.

The nurses came and so did the month of September. Two things I did not want cause I knew that David couldn’t stay here with his Dad and me forever. And sadly I knew from asking the nurses when I was alone in the apartment, if my Tony would see his next (77th) Birthday cause it was in October, only a month from now, that he would not.

Finally, on the 7th of September, 1994, David left for Lakeport, California. He had stayed as long as he could. He had a job to get back to at Safeway. His boss had been ever so kind and letting him come to Hawaii, to see his Dad when he really needed him on the job. I was so thankful for the kindness this man had shown.

But now, it was Tony and I again. Alone. And the nurses. And I knelt by our bed and prayed a lot to God.

The following morning, the 8th of September, people came and brought in a hospital bed for Tony to lay in to make him more comfortable. I cried and cried and cried. I knew already what was coming and after they left, knowing of the time difference, I called David.

When he answered the phone, I told him it was me. And I told him the people brought in the hospital bed, and that our bed was outside on the back porch.

I definitely was NOT as calm as he was.

“No, it’s NOT. “ I answered. “Don’t you remember the story I told you in the kitchen when you asked me if Tony and I finally got married and I showed you my wedding ring and that you had said, you weren’t sure? How I said I was in Church at Mass on that one Sunday several years ago and I “saw”
Tony in the hospital bed and there were the two nurses, one light haired and one dark-haired and how I knew if they brought in that bed, Tony was going home? Well, they brought in the bed. I don’t want it here. Tony will go home if it stays here.”

There was a pause on David’s end of the phone line.

Somehow, David, convinced me that Tony would be more comfortable if the bed stayed. He also said that if there were any changes, if anything happened, I was to call him back.

I promised him I would. 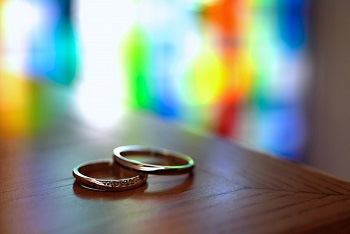