Hi Hitomi,
It has been a while since I filled you in on Mary Ann’s Condition. She has made many improvements: unfortunately, not with her breathing. The doctor has decided that the next step for her would be to have a tracheotomy. I was hoping to avoid that, but she can’t breath on her own. She is on a machine with a tube down her throat right now, but she is unable to breath without it at this point.

She will be having the surgery next week. Her prognoses are unknown at this time. We will just have to wait and see. I was able to see her when she was conscious, but it was not what I had hoped. Her eyes were open and moving around but I don’t know if she recognized me. I am not sure if it because the drugs had not worn off or if there has been damage from her carbon dioxide levels being so high and or not breathing for so long.
She will not be returning to Legacy because they don’t care for patients with tracheotomy she will be staying at the hospital.

Mary did have breathing issues that is one of the reasons she was staying at Legacy She had problems when she slept at night because sometimes while sleeping, she would stop breathing. Then wake and start breathing again. So, then she started sleeping with oxygen mask at night.

If she has a good recovery from her surgery, she may progress to the point of being off the machine during the day and just using it at night. she could also progress possibly to not requiring the tracheotomy at some point. ( This is a long shot and probably not likely because of her age. but possible) The doctor says it may be that her brain is not giving the signal to breathe. If that is the case she will always require the assistance of the machine. We just don’t know.

Mary had signed a health care directive that she wanted all means to be used to save her. Unless she says otherwise, so they are following her wishes by proceeding with the surgery. Without the Tracheotomy she is unlikely to make it.

I wish I had better news to share with you. The doctor she has is very caring and compassionate. I am attaching a picture of her from her 65 birthday.

I will let you know how things progress.
Aloha,
Karen 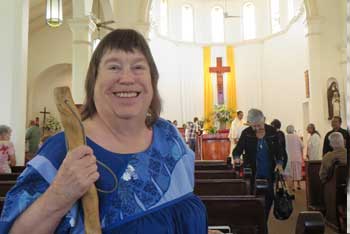