TO ALL MY READERS AND FANS OF MY BLOGS IN JAPAN AS WE CELEBRATE THE HOLIDAY !!!!

It is Christmas Eve and I am so very thrilled to be able to share in the celebration of this most Holy Night with all of you. I am filled with Joy and Happiness. There is a Christmas Carol that we sing here especially on this night in honor our Lord Jesus on His Birthday. It is one of my most favorites and it is called: O Holy Night. It begins: O Holy Night! The Stars Are Brightly Shining! It Is The Night Of Our Dear Savior’s Birth! And I think the song is most beautiful. It makes me cry with Joy when I hear the words and sing it.

It is 24 December and it is Christmas Eve and I had everything planned. I, for once, was totally organized for this night and could hardly wait. I had already gone to Sunday Morning Mass at my Church for the Fourth Sunday of Advent and had planned to go to Christmas Day Mass at 11:45 a.m.

I had planned to have Spaghetti, Garlic Bread, and Salad, plus appetizers for my Christmas Eve Supper. And a drink of course. I also planned to finish reading the latest novel I was into and just plain relaxing. But as we all know, even the best laid plans can change with the snap of a finger.

And mine did just that as I was readying myself, that is, dressing to go to that Morning Mass for the Fourth Sunday of Advent. My telephone rang and that was the beginning of the change for my entire Christmas Eve.

My lady-friend called to find out if I was going to the Morning Mass at 11:45 a.m. and I said yes, I was getting dressed now. Then she said that her son would be serving at The Midnight Mass for Christmas. (Serving at Mass means helping the priest
Which means my lady-friend’s son is an Altar Boy). And would I like to go. OH YES!!! The Midnight Mass for Christmas is most beautiful ! So, when my other lady-friend picked me up for the Morning Mass I let her know that I had been invited to go to the Christmas Midnight Mass and I would be going then.

After the Morning Mass was done, I went to KFC to get my luncheon since the line at McDonalds was too long and brought it home.

My afternoon went well and then early evening came and my lady-friend whom I was now going to Midnight Mass with sent her son up to my place with sliced pork roast and potatoes and carrots for my Supper so my planned Supper did not happen.

Then while I was reading afterward while waiting to dress for Midnight Mass, I called a lady-friend of mine to send along my Christmas Wishes and we talked awhile. Then I went back to reading.

The phone rang. It was my Godmother asking if she could come over and deliver her presents and pick up the presents I had for her and her family which I had been talking about for weeks. I said yes, so she came over. (My Godfather was waiting in their car with their dog).

After they left, it was back to reading but the reading didn’t get very far when again the phone rang. It was my lady-friend asking if she could send her husband up for 2 cups of sugar cause she was making this big dessert to give to someone at Church after Midnight Mass. I gave him my container with my sugar in it. A little later after that, I called downstairs to inform them of the time and that it was getting late and at it was 10:50 p.m. already. Time was flying and the dessert wasn’t finished yet. Their son walked over to the Church (six blocks) and got there long before we did.

The time got to be later and later.

Yes My Dear Readers…..we made it.

At eight minutes to MIDNIGHT my lady-friend, her husband, and I, walked in the Church and even as crowded as it was, we found a place to sit.

The Christmas Mass began at MIDNIGHT and it was just wonderful. We got home at 2 a.m. I read for another 15 minutes and then went to sleep. 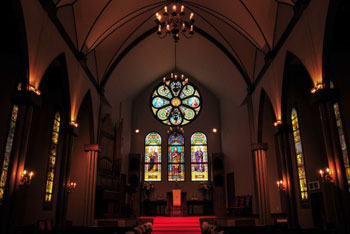