TO ALL OF MY OVERLY EXCITED BLOGGING FANS AND FRIENDS OF SAID BLOGS IN JAPAN !!!

My Dear Readers And Friends……

How are all of you? Have you finally settled down at last from your big New Year’s Eve Blow-Out and New Year’s Day Parties? Or are your parties still happening? Well, 2019 has been pretty good so far so I would not be surprised if they were. Honestly.
Here, everything is quiet.

What was that I heard one of you say? Jokingly, of course! But what was it? Oh. Spoil-sport. Our New Year’s Eve here was quiet too even though there were FIREWORKS AT MIDNIGHT. Beautiful ones at that. Big, Beautiful Ones! And at least I can say that I did not get into any trouble. Good Thing none of you, my dear ones, did either.

That is why I can sit here and write you this week’s Blog: Number 97.

As I begin this week’s Blog,—-the ninety-seventh one—allow me please—to ask you something. Please think really hard about this question and answer it honestly. How do you feel about your Police Force and your Police Officers?

I do not know how you answered that question but I will tell you that I have a very high respect for mine. This could possibly be because I have never done anything wrong that got me into any kind of trouble with them. Wrong! I am not perfect. I was almost arrested once. Almost. For some stupid thing I should not have tried to do. But I immediately learned from that ALMOST and was NOT arrested and my record is clean to this day. And I have had a high respect for The MEN IN BLUE ever since.

In fact, it was the watching of the Television Series: HAWAII 5-0 that brought me here. I first came to the islands on vacation and then came back for good later on when I was twenty-one..

I had been living at the YWCA on Oahu for about four months when I heard about a Police Recruit Graduation and had never seen one and made up my mind that I was going. Now I admit that getting in there was not easy because I was not related in any way to any of the police officers who would be in attendance there. But even this did not stop me. I managed to get in.

While there, I was quiet, I watched and listened, I behaved as a young woman of almost 22 years old should, and above all, I was respectful. I also could not but be impressed after the graduation was over.

The following day I sat in the YWCA dining room at a manual typewriter and typed a letter to the Chief Of Police at that time. I told him how grateful and what an honor it had been for me, to attend the police recruit graduation and that ordinary citizens such as myself certainly did not take the honor lightly. I also told him of my respect for the Police Officers and the Force and many other things.

A few days later when I came “home” to the YWCA, I was stopped by the Head Mistress who ran the place and she gave me a very angry look and she said: Mary Ann! What did you do? (Her name was Mrs. Meredith). I told her: Nothing. And she said then that I should go and check my mailbox because I MUST have done SOMETHING. (She never did like me from the beginning and was always looking for ways to get me to leave the Y for Un-Christian-like behavior I guess you would say).

Curious, I went to my mailbox and opened it and found a single letter in there. Then I saw the RETURN ADDRESS which apparently was the cause of her concern and her anger towards me. It was from The Police Department: City And County Of Honolulu. And to be sure, THE POLICE did not write letters to just anyone…………so………..what could this mean?

I opened the letter and read it and smiled. And went back to Mrs. Meredith who was waiting there at the front desk, waiting and ready to give me “what for”. She demanded to know what it was I had done. …..what horrible deed I had committed that The Police should write to me.

I let her read the letter for herself. It was signed in ink by The Chief of Police. A letter of friendship. He had responded to the letter I had written which Mrs. Meredith knew nothing about.

By the time the next Police Recruit Graduation came about, it was now more open to the public and I was determined to go and I managed to get a ticket so I could go.

On the day of the graduation I appeared at the door and entry-way and was greeted by a man (very handsome!!) who was very tall—-all of six-foot-five—a good 17 inches taller than I was at a mere five-feet. He greeted me and I told him my name. He looked at me and smiled super big and said, You’re the one who wrote the letter. I said yes. It was The Chief I was talking to and he immediately called two of his officers over and he had them escort me to my seat which happened to be at his table where at that time the now long deceased Jack Lord, star of the HAWAII 5-0 television series was also sitting. How lucky Could A Lady Get?

I really did feel honored. And grateful. And wonderful. And if I were to suddenly pass away, I know that one of my fondest memories would be that of meeting The Honolulu Chief Of Police when I was but a young woman long ago. I still feel honored by this to this day.

And even though I no longer have the envelope the Police Chief’s letter came in all those years ago, (1971), I still have the letter he wrote to me with his signature.

ALOHA EVERYONE………
From : Your Very Devoted Mary Ann-san 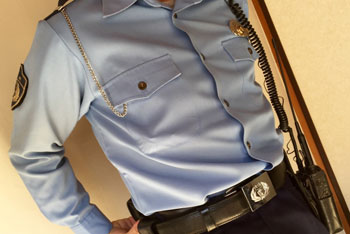