I carried the shrine! 英会話「あぜりあ」本八幡・西船橋・津田沼・佐倉

I carried the shrine!
Recently I participated in a very large festival in Asakusa. I was invited by a friend of mine so I was able to “represent” her town along with her friends and other neighbors from the area. I put on the traditional attire and shoes which were quite stylish in my opinion but it was also really hot. At one point I thought I would melt from all of the heat. Worry not, as there was plenty of water and other refreshments at all of the pit stops that we took.

I have to say I will gladly participate again next year. It was a little scary the first time everyone carried the shrine because I did not fully understand what we were supposed to be doing. There was a certain rhythm that everyone was going by as well as a “lovely” chant. Well, as you may know, I couldn’t quite figure out the exact words that were being said but it surely rang through my bones once I got the hang of the rhythmic steps everyone was taking. The first time around was fairly easy now that I look back and think about it and I’m really glad I went.

I must also enlighten you about the second time that day we all carried the shrine. First that that surprised me was that it was the biggest shrine we would carry that day. I was also told to stay closes to certain people because there might be small fights that break out. When I was told this, I didn’t quite understand the whole fighting thing until it actually happened. There was so much changing and roaring and I could just feel everyone’s energy this time around. You had to be careful not to fall over while walking/waiting to be pulled in to take someone’s place or you were trying to push through to get in there and help carry the shrine. I did not think of it as an athletic event at first but that’s what it started to feel like. So much competition was going on but it was great.

By the end I actually was able to be in the front as the first person. I shouted the chant with all my heart and stepped to the beat and I felt great. It really was quite invigorating. This is something I would surely do again however next time I may wear some padding on my shoulder due to the bruising I incurred from carrying the biggest shrine. It was quite heave but it was also very beautiful. It was an experience of a lifetime. 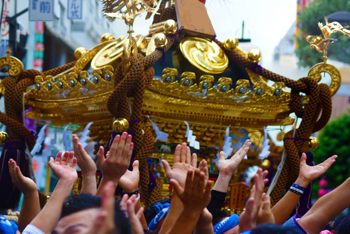