GREETINGS TO ALL MY JAPAN READERS!
ARE YOU READY TO JOIN IN THE SERIOUSNESS OF THIS WEEK’S BLOG?
THEN TAKE UP THY SWORDS AND THEN LET US BEGIN!

Thinking about it now, I had no idea that way back when I was in the second grade, when I was going to Elementary School, my now late Father, would plant a seed in my brain then, that would remain planted there until the next century’s beginning — two years in — when I was then in my early fifties and he was already resting in God’s Heaven for a quarter of a century. But it happened. The thought came crashing through my head like an enormous lightening bolt thrown from the Heavens by the Hand of the Norse God Thor — and when I realized it I was surprised and astonished about the entire thought and found myself to be without words. Without even the words to look up to God’s Great Heaven to tell HIM —- and my Father —-Thank You. Even these words did not exist for me at that moment. Now, I am just smiling in wonderment as I write this Blog Mini-Series for you all.

The planting of the very special seed in my brain came to its beginnings very early one night right after Supper when I came into the front room and my Father was sitting on the couch of our Rental House, a Duplex, on “D” Street where our landlord and landlady lived below us, and my Father was leaning toward our coffee table seemingly to study a board with squares and — to me— some sort of odd playing pieces on it that I had never seen before —one set color— white— the other side set color—black.

Some of the pieces of each color were near the center of the board. Other pieces were not on the board — apparently not being used and put off to the side. My Father was studying the white pieces more because they seemed to be “his” at the moment more than the black pieces. He finally moved one of “his” white pieces and then went on to study the board some more.

I stood there, silently watching him as he moved a black piece — it was small compared to the other pieces, had a short “neck” and a little round top. He moved it one space looking rather hopeful that he had made the right decision. The silence continued —- it was getting to become quite lengthy— until I couldn’t take it any longer.

Finally I asked my Father what he was doing.

“Playing a game,” he replied.

I was silent for a moment and then suddenly, almost boldly, I asked: “Can I play?”

Even within the sudden silence, my second-grade mind could tell that my Father, whom I loved and adored with all my heart and who could do no wrong, at least in my eyes, was considering my question knowing without a doubt and full-well that I meant it; that I did want to play. He smiled finally, and in his kindest and most patient I-LOVE-YOU-VERY-MUCH voice, told me to sit down. I did as I was told and sat down on the front room floor carpet across from my Father—the board and black pieces on the coffee table in front of me.

My Father put all the pieces back in their places on the board where they belonged, even the ones which had been put off to the side and were not being used. The larger ones behind the smaller ones in front.

The center of the board was now open.

With a smile full of love, my Father told me that he was going to teach me how to play a very grown-up and difficult and complicated game that I in time, would grow to love for the rest of my life as he had loved during all of his. It is a game that I still play to this day.

The game is called: CHESS.

Aloha From Your
Mary Ann-san 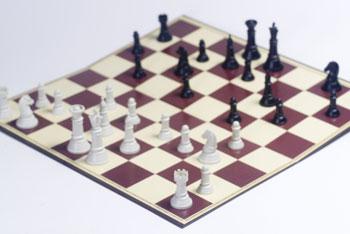