TO ALL MY GREAT AND WONDERFUL BLOG READERS IN JAPAN !!!

My Friends! Here I am with the 5th Part to Medieval Games. I realize this Blog Mini-Series seems to be longer than my other ones I have written….but I hope you will forgive me cause the game of Chess takes time. It is also a tremendous way to learn PATIENCE. And I never thought of that until just now. Wow everyone! You really do learn something new every day!

To begin this part of my Blog Mini-Series, do I DARE say here that life is not all fun and games, especially since we are here TALKING about just that……..fun and games? Oh well, I just did so I guess I am in trouble now.

When I came home from school several weeks later, I did not know whether to be happy about what had occurred that day or disappointed especially knowing that when I opened my mouth to speak of my news, even with my Father there, my Five-Foot-Nothing-Black Cloud (my Mother) would be there too, to put her foot down, raise her voice, and spoil it all. And it would be hard enough to explain the situation as it was without any of that.

I tried to explain to my parents what had happened earlier in the day while I was at school and that it had happened due to my being curious because a bungalow door was open and so I just went up the painted light green wooden steps and peeked in.

There was a man there sitting at his desk and his students were there too. All of them seemed to be studying. At least that is what it looked like. Noticing me, the man teacher asked if I was lost and I politely answered that I did not think so. He said then that this was a special class for older students…..in the fifth and sixth grades.

I could see my Mother starting to get mad because she automatically assumed that I had gone and had done something terrible and that she would be hearing from my school principal any minute.

I went on to tell my parents that while I was in the Bungalow Room, I looked at the students and then at the teacher.

“They’re playing Chess.” I said. It was apparent by the look on his face that the teacher was very surprised that I knew this. “I can play.” I said. “My Father taught me. Well, he’s still teaching me but I can play.” The teacher asked me what grade I was in. “Second.” I said. “And I can play,” I added yet again.

The teacher said that I was not old enough yet to join this class. as nicely as he could and that these fifth and sixth grade students were “studying” and practicing for an upcoming Chess Tournament.

Finally, my Mother, in her anger and complete and total disgust, claimed she had heard enough, but still, she somehow remained bolted to the floor and continued to listen. My Father, smart man that he was, knew there was more coming, and waited. At last I was able to say that I wanted to join the Chess Class in spite of my age and told the teacher this and that I asked the teacher if I could get permission from my Father, cause he taught me the game, could he come and watch us so that I could show the Chess Teacher that I really could play?

Naturally, my Black Cloud was against it all and finally she had no choice but to walk away.

I mean in this case, what could my Mother say?

My Father had taught me The Game. 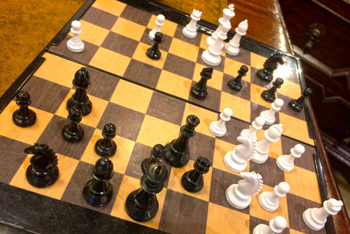