To My Dear Blog Readers In Japan Whom I Greatly Love,

I have returned and with me comes Part 4 of my special Blog Mini-Series that you have all been reading titled: Medieval Games. I am really having fun writing this for you. This entire story brings to me wonderful memories of my late Father whom I am so glad taught me this game and loved me enough to take the time to do so. As you continue to read: Enjoy Please!

I am not sure why—but my Father moved his Chess piece first. I do not know if it was because he was playing with the White Chess-men or because in this case, he was the expert when it came to this game. But he did move first. He moved his Pawn on the Queen side of The Board and apparently that was okay. But when I went to jump my Queen’s Bishop over a bunch of my Black Pawns and yet still stay in the diagonal line it was supposed to be in, my Father said, so sorry, but that was not happening. That kind of a move was not allowed.

I had no choice but to return my Queen’s Bishop, horrible Chess piece that it was, back to its original space, and to try another move using another Chess piece.

I knew then, that this first Chess Game was going to be long and that just because I was his daughter, his Catbird, my Father, whom I loved with all my heart, was not going to let me win. At least not easily. Oh no. If I was going to actually win this Game, I was going to have to EARN the WIN.

Now…..if the thought of this wasn’t enough, I also had a 5’0” (Five Foot Nothing) Black Cloud to deal with as well, whom, I swore long after she died and I grew up, secretly worked for Satan but it was probably not true but it sure seemed as like she did because NOTHING I did ever pleased her or gave her joy or happiness. Nor was anything I ever did, when she was living, good enough so she was always looking to crush my dreams and to tell me that I would accomplish nothing in my life and that I would always be a failure—which of course lead to much unhappiness. This Black Cloud of whom I speak is of course, my late Mother, who thought, as I have said, that my Father was wasting his time teaching me how to play his treasured and beloved Game of Chess.

My Father, of course, had other ideas. He also had faith and confidence in me so he continued teaching me the Game and playing it with me and correcting me lovingly when errors in the playing of the Game were made by me. And there were times when we played when I actually WON some of the Games we played. (My Mother refused to congratulate me when I did win! She was sure my Father had either “let” me win or I had somehow “cheated” to “get” the win).

When times came when we were not actually playing the Game, my Father would do other things to help me perfect my Game skills and learn more.

He gave me Chess “Problems” to solve using the actual Chess pieces. And come to think about the “problems” now, they weren’t simple ones either. However, little did I know at my young age, that soon all that I learned from my Father’s teaching by his hand, would pay off.

I just had to learn how to be patient and wait—but being only in the second grade—believe me, that was NOT an easy thing to do. 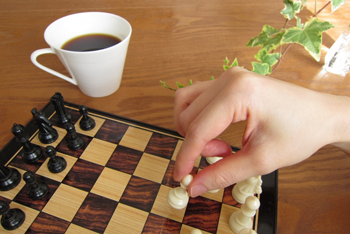