TO ALL MY FRIENDS, BLOGGING FOLLOWERS, AND MY MOST FAITHFUL AND WONDERFUL READERS IN JAPAN !!!

It is so good to be with you again. As you all know, last Saturday was my Birthday and as you all my have guessed I had a very nice day even though there has not been a party for me yet and no luncheons so far. It feels good to be SEVENTY. Really. Besides, how can you have a Birthday Party really, when Easter Day is in your face? Well, it can be done because I have been lucky enough to HAVE an Easter Birthday. This of course, does not happen all that often, but it does happen. My next Easter Birthday which falls on 20 Aprile is in 2025. This will be my last one. I will be 76 then. I know it will be my last because by the time my NEXT Easter Birthday comes around, the year will be 2097. And I shall be HOME in God’s Beautiful Heaven by then.

But enough about my Birthday for now. Let us talk for a moment about this week’s Blog, Number 111. This Blog is coming to you all this week because of a happening that occurred here at my place on Easter Sunday Night which I wrote to our Hitomi-san about and she thought it would be great for a Blog for you, my dear readers to enjoy. And so I promised her I would do it. And it is with great pleasure that I do. Happy Reading To All.

And I had a very lovely Easter Day and a very SURPRISING Easter Night. I had gone to Easter Mass that morning which was a thrill for me because I had not been able to go to Mass for quite sometime due to pain and not being well. So for me, this was a big deal. I wore a beautiful white and black muu muu with big pink flowers. My lady-friend Madelyn came for me, PLUS my lady-friend Patricia, who lives in Ocean View came, along with her son Sky’s soon to be Mother in law. We could not all sit together because The Church was so crowded with people. I myself had to sit in the very last pew that there was. But that was okay. I was there and that was what counted. And The Mass was BEAUTIFUL.

After the Mass was over, I spent a very relaxing day here at home.
Then I decided to call my lady-friend Juliann to find out how her Easter Day went and just talk and see what she had to eat for her Holiday Supper. This is nothing new because we always wind up talking about FOOD. I think this is because this a favorite topic of ours due to the fact that I enjoy watching COOKING SHOWS on Hulu and she took a first year Culinary Food Service in school. The fact that she dropped out of the course does not matter. The one who SHOULD be attending Culinary School is her adopted sister but she does not want to go. When I finally got around to asking what she had had for Easter Supper she said, Ham, Fried Chicken, and Potato Salad. I said that sounded REALLY GOOD. Juliann’s sister had done the cooking.

Juliann and I spoke of other things and then she said she would bring some of the food down to me at my place so I could have some. I thought that was very nice and said so and said thank you. She told me she would call me when she was ready to leave. It wasn’t too long from then that Juliann called me back and said she was coming. As Juliann does not drive, she was driven down to my place by her sister and her Dad came too.

In the meantime, I got out of my bed where I had been relaxing and talking to her. She would be here any minute and so I got up to go to the parlor to open the door and unlock the security screen door so that Juliann could come in.

I open the door, and what do I see? Sitting on my front porch, on the other side of the screen, staring at me is a big beautiful white and gray cat and he was absolutely GORGEOUS. And this gorgeous creature looked up at me if as to say: IS PAWS HOME?

Well, now, as f on cue, Paws comes out from the kitchen and I say to myself: Oh Oh. Here comes BIG TROUBLE.

I was ready for the fight start. I could almost hear it in my head. The growling, the hissing, the spitting, the clawing. I mean, I know my Paws. I have had him since he was a kitten. He became my Guard Cat from the moment we met. He would not let anyone or anything hurt me. He has guarded me his entire cat life in thanksgiving for taking him in and giving him a home. It was going on nine years ago now come this October that Paws came to me in a box with his sisters left downstairs in the laundry room for me to come get because my late friends daughter wouldn’t bring the box upstairs.

Paws and I fell in love at first sight. His sisters were gray with black stripes. But Paws was a Tuxedo boy cat with a black face, green eyes and white paws and white tummy. And when we saw each other for the first time, it was like he was saying: MOMMY! YOU’VE COME AT LAST!

As a kitten, Paws immediately learned where his MOMMY’S bed was and when his sisters came on the bed, he would chase them off telling them, THIS IS MY BED. THIS IS MY MOMMY’S BED. GET OFF. I AM STAYING. YOU’RE NOT.

Even as a kitten, he was very protective and when I was in the wrong, he let me know, by lashing out with his claws and drawing blood at the first swipe of skin. Now claws I ain’t got but I have had cats in my life for a long time so I can hiss pretty well. So, in spite of a few hisses from me now and then, outside, he can handle himself very well too.

He hasn’t lost a fight yet and has always come home. And that is RULE NUMBER ONE. After a huge cat fight, the loser does NOT come home. The winner of the fight always does. I know. My Paws has fought bigger cats and won.

No Hisses. No growls. No spits.

It was with the greatest caution that I asked of the white and gray: DO YOUWANT TO COME IN?

I opened the door a little ways and this huge gorgeous thing came in as nice as you please.

A sniff from Paws.

Still no hisses. No spits. No growls. And most important: No clawing and no drawn blood.

As Paws and the big White and gray walked toward the kitchen, it was if he was saying: YUP. THIS IS MY PLACE. THIS IS WHERE I LIVE. COME IN AND LOOK AROUND.

I could do nothing but look amazed because this is just what the other cat did.

Now it was about this time that my friend, Juliann showed up and she came in singing: HAPPY BIRTHDAY but I had to tell her: SHHHH! Juli! PAWS HAS BROUGHT COMPANY!

Juliann asked if it was in the house which was a natural thing to ask being that Paws NEVER BRINGS HOME COMPANY. I told her the cat was in the kitchen and she looked and saw it saying how beautiful it was.

Juliann and I waited in the parlor and finally Paws and his company came out, walked across the parlor, and went outside.

I told Juliann that if I did not know any better I would say that Paws brought the other cat home to let me know that he, Paws, was going HOME soon and he wanted me to know that he would accept this cat, the white and gray into HIS house after he had gone.

I have personally had other thoughts too.

Like maybe the White and Gray is now Paws’ personal body guard.

But why would he need one the way he protects me?

It is possible he does need one at times, I would venture to guess.

My Darling Baby Paws is BLIND in his left eye. And that is a pretty good reason. 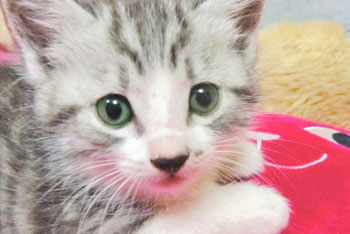