TO ALL OF MY DARLING, DEAR, AND ADORABLE ONES, MY FRIENDS, EVERYWHERE IN JAPAN AND ESPECIALLY MY DEAREST FRIEND HITOMI-SAN, ON HER BIRTHDAY !!!
Greetings of Happiness to all of you on this New Year’s Eve. I hope that you all enjoy your special evening and whatever you plan to do. I know that this is The Biggest Night of the Year so I am hoping that you will all “PARTY BIG !!!” not only for yourselves but for me as well. Since I am not with you, I will have to do what I can and silently wish for the best. I would love to party with all of you tonight and really have a great time. Wouldn’t it be great if we all could plan something and get together. Oh! I wish we could. I wish with all my heart that it were that simple. Well, one can dream and sometimes dreams do actually come true. So, may we all party tonight and look forward to tomorrow, the beginning of 2019 and be filled with Joy and perhaps on one New Year’s Eve soon……it will finally happen and you will all finally meet your Dear Mary Ann-san. Wouldn’t that be outstandingly wonderful?

THIS IS IT !!! It is The Big Night !!! The Biggest Night of all !!! It is NEW YEAR’S EVE at long last !!! I can not believe THE NIGHT of all NIGHTS is finally here. I have waited all year long for its arrival. It is the most exciting night of the year. Everyone plans for it. And if they are not already planning for it, they are HOPING for it. WAITING for it. And THEN planning for it. NEW YEAR’S EVE IS THE BIGGEST PARTY NIGHT OF THE ENTIRE YEAR !!!
And almost everyone has SOMETHING planned for that night; a party to dress up for and go out to or otherwise. MOST OF THESE PARTIES ARE BIG but there are some that are small-sized dinner parties, or cocktail parties. And usually wherever the party is, there is a lot of drinking and dancing and fun and saying good bye to THE OLD YEAR and hello to the new one. This is what all of us around the world shall do tonight. Party Big in our BRIGHTEST AND BEST clothes and wish THE NEW YEAR in. This means staying up until MIDNIGHT and after.

There are some people however, who do not celebrate the holiday when it comes. And of course, they all have their different reasons whatever they may be. There are people who do not celebrate our holidays period. But this is not the night to speak of them. For us, seeing The New Year in, means hope and change and happiness for everyone. And everyone celebrates differently but still it is still a part of The Holiday Season here in America and around our World. And oh yes, we must not forget to SING The New Year in. Singing is a big part of the celebrating too.

So, yes, now. I know that all of you lucky ones are going out tonight to celebrate. But for the past several Blogs, I have written of this big night and what about me? I am a huge fan of New Year’s Eve too. And it has been absolutely AGES since I have gone out on New Year’s Eve to party and have fun. In one of my most recent blogs, I am pretty sure I mentioned the last time I did so, was back in the mid-1980’s. Somewhere in that time period anyway, if I remember correctly.

I remember I was all set to go out one New Year’s Eve with my Tony and then he discovered I was sick. And he said, nothing doing. We weren’t going. We were staying home. And no, I, we, had not moved into this place yet. We were living elsewhere at the time. And of course, Tony won on this, and we did not go out for that New Year’s Eve. Boy! You should have seen me that night. Was I ever mad. He kept telling me that there were other New Year’s Eve’s when we could go out and party but that Night, we were staying home. However I had been looking forward to New Year’s Eve all year and now, because I had a cold Tony had put his foot down and said, no way on going out. I had nothing, absolutely NOTHING to say to him after that. I refused to say one word to him. As the evening progressed, his attempts to apologize were met with total silence on my part. We were missing out on THE BIGGEST PARTY NIGHT OF THE YEAR!!! I even cried. Time passed and supper was had but I barely ate and the later it got, the more mad I got, the more disappointed and the more unhappy I became.

There was NOTHING that my Tony could say to me that night that would make up for my losing out on The Biggest Most Fun And Exciting Night Of The Entire Year. I had looked so forward to going out. It hurt so badly that we had to stay home. I did not feel that badly I thought. We could have gone out and maybe had a little dinner or at least something. But no. In an Italian Household, the man’s word is LAW so that is why when Tony said we weren’t going out, it meant we weren’t going out. Period. And that is why there was nothing really that I could say. No begging or pleading on my part would get him to change his mind. I was sick and we were staying home even though I was blind to my stubbornness and wanted my own way.

When it got close to midnight, I finally gave up and decided that The Old Year would end without me and The New Year, as bad as it would be, because I wasn’t going to usher it in with any kind of fanfare, would begin sadly, without me being a part of it.

With silent tears running down my face, I started to get ready for bed.

Then I heard Tony’s voice asking me to please come. He wanted to show me something. It was nearly midnight and my New Year’s Eve, my big party night, was ruined. The last thing I wanted was to see something he wanted to show me. I refused to come but he was on the front porch, standing on our part of the ramp, and he wouldn’t give up. Just for a minute he said, that’s all he wanted. Just one minute.

Still, I refused, still being my hurt, stubborn self.

But being a full-blooded Italian-American whose parents were both born in Italy, he could be just as stubborn as I was. But he could also be gentle and he asked me again, to please come.

As hurt as I was still yet, my Tony had said the magic word that all parents and all little kids know. The word PLEASE. It was a word my Tony seldom used. He would use it only one other time in his life when we were talking and that would be when he was ready to go HOME to God and be with HIM in Heaven and he would beg me to please make the pain stop and I would kneel by our bed and pray for him.

I came outside and stood by him. And time stood still.

Suddenly, it was midnight and straight ahead and up in the sky, there were fireworks everywhere! The sight was beautiful! Breath-taking!

We kissed and made up. He said he was sorry. Then he added that maybe next year on New Year’s Eve we could go out.

I was satisfied. Next year we would go out. He took care of me for the rest of the night and early morning and watched over me until I fell asleep.

As it turned out when the next New Year’s Eve came, we decided not to go out. Instead we partied and drank at home. We had the best time and it was safer that way. We partied that way ever since and I felt like I had not missed anything. We were together and still having our fun on New Year’s Eve ushering The New Year in.

Now, comes the answer to the question I guess all of you, my devoted readers and fans and friends, have been wondering about. Is our Dear Mary Ann-san going out for New Year’s Eve?

Well, I admit I do have a PINK Muu-muu I could wear. So, I COULD go out if I wanted to. But my Tony is no longer here. And I am not even sure if my sister-in-law Vivian will be going out tonight either since she no longer has David to go out with and party and have fun with since he died in 2017. She never said what any of her plans were.

As for me, yes, I could call a taxi and go out. But I have no one to go out with. Besides, I don’t think I want to go out. I can party here at home and have a good time. And also besides, I am also in the middle of moving so, I guess I have my answer.

Am I mad, disappointed or upset?

No, it is something I have gotten used to. I just miss that Midnight Kiss from my Tony on this night is all.

But like I said, I can still party. Once I have eaten first. And have done some work around here.

And then maybe at MIDNIGHT if I am good—- 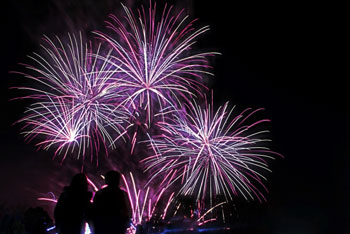