TO ALL OF MY WONDERFULLY ADORING FANS AND FRIENDS IN CHIBA-KEN AND ALL AROUND JAPAN WHO READ MY WEEKLY BLOGS !!!

Hey Everyone! How are all of you doing this weekend? I am doing okay. No mishaps with Backed-Up Kitchen Sinks this weekend. Only thing is that none of my letters are going out cause my lady-friend is sick right now and can’t mail them so I have slowed my letter writing down just a little wee bit until she’s better and can come here.

So, are you all ready for my latest Blog? I am. Lets go then and lets get to it.

Until My Tony died, I used to love September. Now I don’t so much. Except for a few days, during the month, I have almost grown to hate it and wish it was over. Over the years however, I have gotten a little better at it. Except for the actual day of my Tony’s Death, ( 8th September), I guess you could say that things are coming okay. I only get more sad when that day comes along and I fight through the rest of the month, wishing for its end and the move into October because even though October is my Tony’s Birthday month, I can handle a little better

But anyway, it was my first month without my Tony and not having him around and I was so alone and didn’t know what to do. I cried and cried and then finally, my landlord, Mr. Jones, called me and after barely remembering to give me his condolences, he asked me if I would be returning to the Mainland. I told Mr. Jones that Hawaii and Hilo was my home, so why should I do that? He said: Well, I just thought……. I told him that well, I was hoping to stay here. He was surprised that after the death of my husband I would want to stay.

Then suddenly, I asked Mr. Jones if I could have a cat.

He asked me why on earth would I want one?

I said that, well, I was all alone now, and I was lonesome, and it would be good company for me. The obvious answer. Was he so dumb?

Anyway, he said yes. So, I told everyone I knew that I was “KITTEN SEARCHING”. For real. My landlord said I could have one. Everyone in my complex was thrilled for me.

September finally came to an end and October came with me wondering if this month would be as slow as the first one had been. It dragged. Then the 12th of October came and the lady downstairs in Apt. # 8, (now deceased) told me she had seen a Kitten at the FARMER’S MARKET in Downtown Hilo. I asked her anxiously if it was still there. She said she thought so and was willing to drive me there to see. And so off we went. The Market was just a few minutes away.

When I got there, I jumped out of the car while my friend parked and raced to the place where she told me it was. I said to the person that I was told they had a kitten, and I was looking for one, was it still here? Could I still get it? It was there still. In the cage. It was a tiny little thing. And it was eating a piece of chicken. I asked how old it was, just as a little girl came up to look. The answer was : about four weeks.

“Are you going to take the kitten?” she asked, probably hopeful that I would say no.

The little thing was only four weeks old. But it was eating CHICKEN.

“She’s a little young,” I said, “But yes, I am.” After a moment, I added, that I was sorry and the girl went away. Then I asked how much the kitten was. She was free, was the answer. So me, and this little four week old Tuxedo -girl kitten, with my friend’s help, headed off to the Bank, then to the store, to get a few kitten things and then back to home. (Apt 18).

I brought her and my kitten things from the store, upstairs and set her on the floor in the parlor. I got her food and water ready for her and then took her into the bathroom and showed her where “her” bathroom was. I placed her in the litterbox and said this is your place
for use the bathroom, and showed her what she was supposed to do. At four weeks old, I wasn’t sure if her Mama had shown her yet what to do because normally kittens are not ready to be given away to eight weeks old.

I took both of the kitten’s front paws and pushed them forward to dig a puka (hole) going back and forth to make the puka for her and then moved away. Well, apparently the little kitten knew what to do cause she went on full speed ahead and finished what I showed her and then went and did she business then. Oh! GOOD GIRL! I said. Then she covered it up and all was good. She jumped out and went on to investigate the rest of our apartment while I cleaned the litterbox and made it nice for her. Later on she ate and drank her water.

The little darling slept with me on the bed that night but really neither one of us got much sleep cause the next day was Tony’s Birthday, his first one since he died, and I had to be at the Hilo Airport early.

The next morning, the 13th of October, the little thing wanted to go with me. Sadly, I told her she couldn’t. I told her I had to go to Honolulu, to Punchbowl to see my husband, but that I would be back. She mewed at me. I told her in the meantime, she had to be a good girl and stay here (home) and that she had the whole place to explore while I was gone and that I would be back around 8:30 or 8:45 p.m. that evening. She mewed again. SHE UNDERSTOOD.

SHE SOMEHOW KNEW IT WAS MY TONY’S BIRTHDAY AND THE REASON WHY I HAD TO GO.

So after kissing her sweet little face, I said good-bye, be good, and I was on my way outside where my taxi was waiting to take me to the airport.

I had absolutely no idea what my little angel did all day while I was gone but she was waiting for me when I got back and we were so happy to see each other and I told her I missed her. (I REALLY DID !!!) .

I told her about my whole trip. From beginning to end.

How I flew into Honolulu, got off the plane, caught the WAIKIKI BUS to Downtown Chinatown, asking for directions to the nearest flower shop, (the bus driver only waved his hand and said nothing), and I got off. At the stoplight, I said a prayer telling Tony it was my first time over since the funeral and I didn’t know where to go for flowers. At that point, I was told to cross the street with the light, go down two blocks, turn right and go down half a block, turn right and go in.

And there was the flower shop.

I went directly to the counter where a lady was. And I said: May I please use your bathroom? It was apparent she didn’t like the idea and said so. Like to say: Our bathroom is not for customers. But I said, please ma’am. I have to go and my home in Hilo is a long way from here and I haven’t been since I left the house this morning. What could she say? She took down the key that was hanging in plain sight and took me to the back of the flower shop and opened the door for me and handed me the key telling me to return it when I was done.

I did as she said standing in front of the counter.

I said thank you and stood there for a moment but before I could say anything, the woman opened her mouth and said, “You want Roses.” It was NOT a question. It was a statement. I said yes.

Then she said: “You want thirteen roses. Red ones.”

How in Heaven did she know? We had never even met.

After I paid for the roses, I left the shop to go back the way I came, turning left this time to go up the block, checking out the street address as I went. The number was: 1013. I couldn’t believe it. Ten-Thirteen. The numbers for my Tony’s Birthday. 1013. October 13th.

I was still amazed when I caught my next bus to go and get a third bus to go up to Punchbowl. And amazed still more at my time of arrival at Tony’s grave with the flowers. At that time, I was wearing a watch. It said: Ten-thirteen a.m.

I stayed at his grave most of the day, cleaning it, and the gravestone, watering it, putting the roses in the vase of water, saying my Rosary for him and then talking story with him, telling him how I had found the shop and still getting here to the grave on time. Telling him how much I missed him, loved him, wished he were here and of course, I wished him a Happy 77th Birthday. And I told him about my new kitten waiting at home and how I had gotten her and how happy I was to have her.

Finally I told my little Tuxedo-girl kitten how I had left the Punchbowl and how I returned home using the busses and the plane and the taxi. And here I was. Back with her. Safe and sound.

She meowed and purred and assured me she was as I held her in my arms, petting her.

Later on, when the little one was in the kitchen and I was getting ready for bed, I knelt down to say my prayers, thanking God that I was able to go to Punchbowl and visit Tony and about my visit to the flower shop and then I thanked God for the kitten. But I realized, she still didn’t have a name yet. Surely, God, You have a name for her and have given it to her already. Please let me know what it is.

I whispered the name so softly that I almost didn’t hear myself say it.

And suddenly, Princess was there by my side, on my bed, close to me, purring as loudly as she could.

It was my Tony’s Birthday but the little Kitten who came a day ahead of schedule (the 12th of October), and who was newly named : Princess, came into my life to spend 9 beautiful years with me and would the first of my three cat family.

She was truly a gift indeed.


Aloha and Love,
Your Mary Ann-san 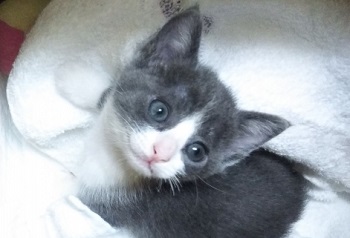