TO MY DEAR, DARLING, FANS, AND FRIENDS OF MY BLOGS.

My Dear Ones !! I am writing this Blog (#145 Part 26—G) on Friday the 13th of December. At the writing of this e-mail and Blog, Christmas is 12 days away and my mouth is watering because my mind is on your Christmas Cake that I have heard that you enjoy on that day. I would certainly love to know what kind of cakes you make. And what else you do for Christmas. If I were over there in Japan with you, I would definitely learn what you do real quick. That goes for your New Years too.

On to The Blog My Darlings!

I gotta admit, my first three months as a Widow, went really slow. The days just crawled along and I was definitely NOT looking forward to the year of 1995 at all. In fact: I ABSOLUTELY HATED THE IDEA of the coming New Year. For once, it was not a time of celebration. Not at all. The only thing the New Year of 1995 meant to me was that I had to say that my husband Tony died last year. And that, I didn’t like. Not one bit.

I would give anything at that time if 1995 wouldn’t come. If the change to The New Year wouldn’t come. If only I could stay in 1994 forever. I could remain 45 years old forever too. But it was not to be. The days marched on and soon it was, the 31st of December, and our dear Hitomi-san, whom I would not meet for quite a while yet, was having her Birthday.

It was New Year’s Eve—a day I had always liked up until now. How could I celebrate it? I was Tony’s Widow and my Widowhood was only three months along. I did not want to celebrate it. I did not want the change of The New Year to come. But I couldn’t get my mind off it.

Then something very unexpected happened.

Not to me ……… but to my little Kitten: Princess.

Princess suddenly jumped up on my dining table and began not just mewing, but meowing just so terribly loud, crying, and rolling around and showing me her Kitten rear-end and refusing to stop. I said: Princess! What do you think you’re doing? You stop that! But she carried on all the more loudly, jumping off the table, and rolling about on the parlor floor and continuing to meow.

Princess! I cried out. Now you stop that! I grew up with cats and kittens! And I DO know what you’re doing and you aren’t old enough yet. You are only THREE MONTHS OLD. You can’t possibly be In Heat! You’re just a little thing.

But she was ……. And there was nothing I could do about it.

She was IN HEAT all during New Year’s Eve — non stop. AND New Year’s
Day.

Oh My Dear Little Princess who wants so much to become a Queen, (A Queen is what you call a pregnant cat.), what am I going to do with you? I asked her.

Princess stopped meowing, crying, yowling and rolling around. And she politely sat down on her Kitten rear-end. In fact. She looked totally pleased with herself and if she could talk, she most likely would have said: MISSION ACCOMPLISHED MOMMY !!! I DID IT !!!

I looked at Princess totally confused and knowing that I had a HUH? kind of look on my face. I didn’t get it. Her silently pleased look and my HUH? look made no sense, not just then.
could
It took me a few more minutes while Princess patiently waited.

Then it suddenly dawned me. Today was the 2nd of January, 1995. New Year’s Eve and New Year’s Day were over. And a miracle had happened without my even realizing it had taken place.

I had been so pre-occupied with Princess being IN HEAT that the change in the year had come and gone without any sad assistance from me.

THERE WAS NO TURNING BACK NOW.

THE DAYS WOULD GO ON.

And go on they did.

I fought through every first Holiday without my Tony, dreading every one of them.

Then the 8th of September 1995 came. I had been a Widow for a whole year. And even though Princess was here, nothing stopped my tears as she tried so very hard to comfort me. She never left my side. She nudged me, purring as loud as she could. She even licked me, knowing that I was hurting deep inside.

But even all of her Kitten Love that she was sharing with me, wouldn’t bring my Tony back.

It was a few days after this that my lady-friend from downstairs in Apt.# 5 came to see me. She (Claire), wanted me to know that her friend’s cat would be having a litter of kittens soon, and would I like one? Yes I said because the new kitten would be a good companion for Princess.

Several days passed before I heard from Claire again.

It was nearly the end of October, 1995 before she came.

Claire came saying she had good and bad news. The mother cat had had six kittens but the dog next door had eaten 5 of them so I was getting the one that had gotten away and hid and that the dog couldn’t find.

She brought the kitten in a carrier.

When I opened the door to the carrier and gently began to pull the kitten out, my eyes got bigger and more wide. I couldn’t believe what I was seeing.

The black that I had thought at first was the little kitten’s fur was a thick “coat” of fleas. There wasn’t a space on this little kitten’s body that wasn’t covered with and by at least one flea. Even her little eyes were covered.

There was nothing Claire could say

Well, I knew I could not get rid of the fleas on my own so I took the little thing to the Vet’s. I came in crying. And I told the Vet, I want you to know, what you’re about to see, I did not do to her. She came to me in this con themdition. I didn’t do it, I swear. Please, please, help her. I want to keep her. Please see what you can do.

I didn’t do it I cried. Isn’t there something you can do to help her? I asked. Tears were running down my face and now even my blouse was wet with tears.

The Vet said the first thing he had to do with this kitten was give her a Bath and Flea Dip and after that I was to use Flea medicine. And so I did from the moment I took her home.

I took very good care of her and then one day Claire came by to visit and to see how things were going and I told her things were just fine. And not seeing any kittens around, she finally asked: And how is the Little Flea-Bag? I happened to turn around at that moment and the kitten was laying on top of my book that was on the dining table so I said: GAI-JIN, please get off of Mommy’s book. But she continued to lay there.

I turned back to Claire.

Come see for yourself, I said. There she is. Her name is : Gai-Jin.

Claire said that this kitten all beautiful and snow white and without a single flea couldn’t possibly be the kitten she’d given to me.

I said she was. I took her to the Vet and he helped us. Now she is okay.

Claire didn’t know what else to say.

And I thanked God for my little Gai-Jin.

My Little Himalayan girl, Gai-Jin stayed with me 11 years and then went Home to Kitty Heaven.

Aloha And With The Deepest Love,
Your Mary Ann-san 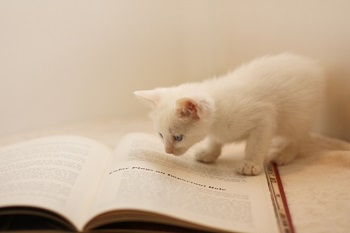