TO ALL OF MY DEAR AND LOVING FANS OF MY WEEKLY BLOGS !!!
My Dear Ones! Christmas is almost here and then New Year’s Eve will follow and your Mary Ann-san is s very excited and I have been working on this Mini-series so long that I am now trying to count off the Blogs until its end, and am getting nowhere quick. Oh well. Pretty soon.
For now we shall continue with Blog: #146. Happy Reading.

My little Tuxedo-girl-cat Princess was all of three years old and my little Blue-point Himalayan-girl-cat Gai-Jin, formerly known by Claire as “The Little Flea-Bag”l before her change came about and she became beautiful, was everything a two year old could be when I was out at The Farmer’s Market in Downtown Hilo again, just walking, when I came across a Orange and White Tabby boy kitten sitting in a box and looking for a home. He, like my other two cats, was free. I looked at him up close and wow was he cute! I said, How would you like come home with me? He began to purr very loudly. And then I said, And meet Princess?

Well! The minute I mentioned Princess, this little Orange and White Tabby boy-cat hissed and spat and growled at me and backed away into the box and tried to get as far away from me as possible. It seemed the poor dear little thing couldn’t back away fast enough.

I hadn’t gone very far when I thought about my little Himalayan, Gai-Jin and I thought if this little Tabby-boy would take to her. I returned to the box where the kitten was and looking at him, I said, You know little one, I have another cat besides Princess. You might like her. Her name is Gai-Jin. What do you think? Do you think you might like to come home with me and meet Gai-Jin?

It was because I mentioned Gai-Jin, I got to take him home.

True to his Kitty-word though, the little orange and Tabby-boy didn’t like my Princess for nothing. And she couldn’t stand He either. The two of them just went at it tooth and nail, er, claw..
I took him to the Vet on Halloween afternoon and found out he was12 weeks old and he and The Princess were fighting for the rights to rule the FEOLA HOUSEHOLD. Princess was the boss of course so she won out. There was nothing Crichton could do as I would finally name him.

Anyway, Crichton would stay with me too he would out-live both Princess and Gai-Jin who adopted him and called him her own. When Gai-Jin went home to Kitty Heaven to be with Princess, in 2007, I couldn’t mention Gai-Jin’s name to Crichton at all. He would become VERY upset. He would cry and mope and have nothing to do with me. He would be this way for the rest of his Kitty Life whenever I would ask him if remembered and missed Gai-Jin.

Crichton would stay with me the longest, out-living both Princess and Gai-Jin.

Crichton was be an old cat, dying at home at the age of almost 17 on The Ides Of March, 2014. And because of his “adoption” by Gai-Jin, also known as Baby-san, Crichton also was known as Baby-Boy-san. 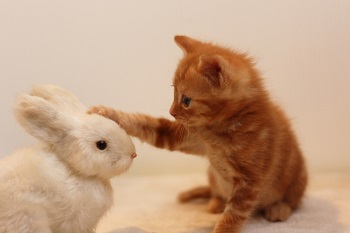