I wanted very much to write about this year’s Lent mainly because 2020’s one was so horrible due to Covid-19. In fact, I was very excited about it. I almost couldn’t wait for it.

Little did I know that I would be preparing for ASH WEDNESDAY (which began on 17th February 2021) a week before on the 8th of February. But that is what happened.

I began my preparing while watching and listening to the 3 a.m. Mass on the 8th of February. Father John Paul Mary would be giving the Homily (Sermon) for that day.

I should mention here that the Saint for the 8th of February.

Her name is: Josephine Bakhita.

Father John Paul Mary began his Homily by telling her story. That is what his entire Homily was about. Her story.

From the age of six, Josephine was sold as a slave. Through her many masters, she learned about violence. And pain. She was beaten, whipped, branded. You name it, It was done to her.. Then one day, she was sold to an Italian Master. This Master was a Christian. It was through this family that Josephine learned that there was only ONE Master: Jesus and HE LOVED HER. HER. JOSEPHINE.

Later on that morning, long after the Mass was over, I
called my Godmother Karen to tell her about the Mass I had heard which I described to her as being horrifyingly beautiful. She said she had never heard a Mass described that way. She had heard it described in many ways, but never in that way.

Then I explained what the Mass was about. About Father’s Homily. I told her about Josephine Bakhita and what I had learned about her from the Homily. I also told my Godmother Karen that I wished I could locate a book about this Saint. I also said that I saw a book on EWTN-TV network in the Catholic catalog that could be ordered about a HOLY LENT.

Well, she checked things out on her computer and the
following week, on the 15th of February in the mail
from Amazon, as a gift from my Godmother Karen,
was a book titled: BAKHITA : From Slave To Saint by
Veronique Olmo AND ALSO the book MAKING A HOLY
LENT. With the Bakhita book there was also a Holy
Prayer Card enclosed with the Saint’s picture blessed
by Pope Francis. There was also a book of FOREVER
STAMPS enclosed too.

So has you can see, because of THAT Mass and THOSE books, I shall indeed, learn more about God, Jesus, and The Holy Spirit because of and through this Saint : Josephine Bakhita.

May Blessings Be Showered Upon Her Through Prayers To Saint Josephine!
In The Year Of Our Lord ………… 2021 !!!

May you all have a Most Holy and Blessed Lenten Season !!!!

Aloha Everyone !!!!
From: Your Dear Mary Ann-san 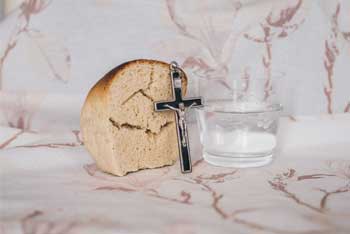