Hi again. In the spring and the summer, I really like watching the high school baseball tournaments on TV. I played baseball when I was a high school student, but the level I played at and the level of those teams on TV are like night and day. I think I’m right in saying that the tournament in August is the bigger one of the two, and is a true national championship which any high school in the country with a baseball team could conceivably win. There is nothing in the US that is comparable to this, as most high school tournaments are only at a state or regional level. There are national championship tournaments for college sports, but not, as far as I know, for high school. Anyway, I am always really impressed every year by the skill of the players at the Koshien tournaments. I never start out caring who wins, but after watching a team play a few games, it’s easy to start rooting for them. I live in Chiba, but the Chiba teams haven’t done so well for the past few years, aside from last year when they made it all the way to the best eight (or maybe the best four, I can’t remember). I can begin to understand how the teams reach such a high level since I’ve had a few high school students in my classes who played baseball on their high school’s team. Ask what they did on the weekend or in their free time, and they always have the same answer: practiced baseball. They practice very very hard. I guess students who are serious about sports and join their high school team always practice hard, no matter what the sport. One thing that I don’t like about watching the games is all the bunts. Teams bunt runners from first base to second base in the first inning, and sometimes with one or even two outs. I hate it. And because teams bunt so often, they are also amazing at defending against them, so the success rate isn’t even that great. I’d say it’s about a fifty-percent success rate. It’s one interesting difference between Japanese-style baseball and American baseball, but just because it’s interesting to think about doesn`t mean it’s exciting to watch. 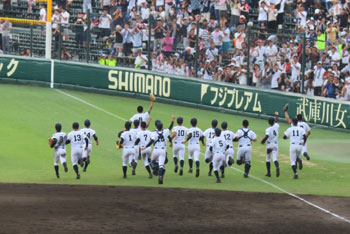