TO MY BLOG READERS IN JAPAN : I AM SO EXCITED TO BRING YOU THE 2ND PART OF THIS MINI-SERIES BLOG. OH! WRITING THIS AND ALL MY BLOGS TO YOU ALL BRINGS ME SO MUCH HAPPINESS. I HOPE ONE DAY, WE CAN ALL MEET. IT IS MY HOPE AND DREAM.

To continue on from last week, My Dear, Dear, Readers of this Blog you are following: Being only in the second grade, I had never heard of such a thing, such a game. But that is what my Father called it. Chess. So I thought it must be true because I had never once in my short span of life, ever heard my beloved Father tell a lie.

And so my Father went on about the matter of actually explaining the game of Chess to me and how it was supposed to be played. He explained to me about The Board. And he had just begun telling me about the Chess pieces when, I guess the silence of the house and then the wonderment of where her daughter had of a sudden disappeared to — because as everyone knows — if you have a child in the house and it is quiet — unless the child is actually really asleep —the — the quietness is not a good sign — finally got to my Mother because she came out of the Kitchen looking for me.

When she saw I was with my Father, as calmly as she could, she commented about the time and that perhaps I should go to bed; it was after all, nearing eigjt o’clock. And even though it was Friday and there was no school the next day, I should be in bed. SLEEPING.

I told my Mother that my Father was showing me how to play Chess.

Instantly, my Mother became very displeased— and as she sent-me off to bed—quite swiftly I might add— the last words I remember hearing were ones questioning my Father about the whole thing as though I were no longer in their presence and had already left the room.

“She’s”, — my Mother said, not even bothering to use my name—”a little young for Chess isn’t she? I doubt very much that she’ll like it. Chess is NOT a game for a CHILD.”

However, my Father seemed to disagree because the following evening when there was still plenty of daylight left, my Father brought the Chess Board and Chess Pieces, that is—Chessmen back out and he once again began the explaining of the Chessmen. But first I had to learn and understand that Chess—unlike a lot of other games—was very serious—and it was only a game for two. And each person could choose a “side”—black or white—.

Well, it was apparent what I would be without my even having to ask. My “side’ was “black” while my Father’s was “white”.

As time went on, my Father explained slowly about each Chess piece on The Board. What it was. What it did. How it moved. What the object of The Game was. To keep The Queen on The Board and The King safe and how each piece personally guarded The King with its very life because The King could only move one space at a time and must not be “check-mated” which meant in the final end, The King could move absolutely nowhere on The Board due to being blocked by one or more of the other side’s “enemy” Chess pieces. And when that happens, that means The Game is over— and—you lose.

But there are sometimes when you are “check-mated” that you can get out of it which means you are still in the game and there is still hope for you which is a good thing for you because you still might have a chance of winning the game. YES!


Aloha
From,
Your Mary Ann-san, in Hilo, Hawaii, USA 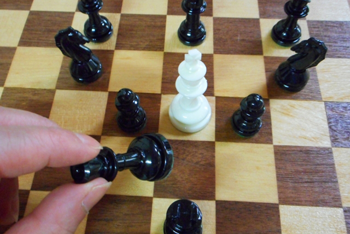