To My Dear Blog Readers In Japan…..!!

Here we are again together at last!! My Blog Mini-Series titled MEDIEVAL GAMES continues this week with Part # 3. Fortunately, My Dear Readers, you will not have to wait a week for Part # 4 of this Mini-Series because I am sending the fourth part after this. Have a good time reading. Hope you are learning something too.


Play And Win The Game. I wanted so much to do this. it meant so much to me.

From then on during my childhood days every day my Father and I managed to find time to work on my Chess Skills. I learned about all the Chess pieces—The Pawns—all eight of them—and how they guard the other pieces on The Board and also how they are able to move across the Board without being taken after the first move when you can move two spaces—-but only once—and after that only one space at a time and one space diagonally to “capture” or “take” an enemy pawn.

The “Rook” which is the Chess piece that looks like a castle on top and of which each player has two—one at each end of The Board—on their side—can move both horizontally and vertically in a straight line on The Board.

The next Chess piece, which for some strange reason, at my age, I took an instant liking to—was: “The Knight” —- my Father said. And like the “Rook” each player had two of them and they sat next to each of their “Rooks”. This piece—that is, The Knight, is shaped like a Horse’s Head and can move on The Board in an “L” shape fashion only.

With only two more Chess pieces left to go after these following ones, I think the only Chess pieces I liked the least were The Bishops which sit next to The Knights on The Board and can move in a diagonal direction only and only beginning on their own color space.

The Queen is the most Powerful Chess piece and can move in any direction. Vertically. Horizontally, Diagonally. And of course there is The King who must be guarded at all costs and as I said in Blog # 16—Part # 2 of this series—can only move one space at a time. But it is still yet, The Chief Piece.

And all these, my Father taught me how to move. Then he taught me at first, simple moves on The Board involving the Chess pieces. Then one night over the dinner table while we were enjoying our meal, my Father announced that because it was the weekend once again, he and I were going to play an actual Game. I, of course, couldn’t have been more excited and my Father was delighted. My wet-blanket Mother on the other hand told my Father—using his first name—that I was way too young and did not have a mind for such things or for that matter, the patience and that he would be wasting his time. My Father then stood up from the table and politely told her that she was wrong. That his daughter, his Catbird, (his childhood nickname for me) could do ANYTHING! And that included playing The Game Of Chess.

Aloha,
From Your Mary Ann-san 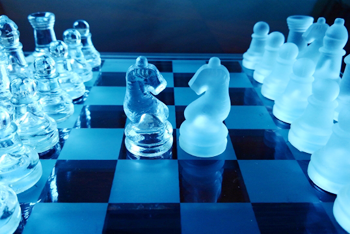