TO ALL OF MY WONDERFUL AND DEAR FANS IN JAPAN WHO READ MY WEEKLY BLOGS!!!

How is everything everyone? It has been a long week and I have missed all of you! I hope that you have been thinking of me while going through your daily lives there in Japan because you are constantly in my thoughts. I am also have great hopes that your weekends there are just as fun and as exciting as they should be. Have a good time in whatever you do. And have lots of Autumn FUN !

Hey There! What a surprise I got yesterday! It was so FUN. I could not believe it. As it turns out, yesterday, the 28th of September was my late parents wedding anniversary. I am not speaking my late father and my late step-mother who happen to marry on my actual parents wedding anniversary but my parents. My POPPY and my MOMMY. Yes, that is what I called mine when I was a little girl child. Anyway, my parents wedding anniversary was yesterday, the 28th of September and I was just taking it easy relaxing in my chair on the front porch. I figured, since it was such a beautiful Autumn Day, I would sit there for awhile and get some good reading time in, which would have been absolutely terrific if it had happened. But at one point, I happened to look down the ramp, and my neighbor Lawrence, happened to be sitting outside and he waved to me and I waved back. I thought that was nice because we had not hardly spoken in a while.

A few minutes went by and I looked down the ramp again and he waved again and so did I. Finally a bit of time went by and I had finally settled down to read when Lawrence’s “wife” David came down to me and said that Lawrence was inviting me down to their place to have a chat. I said: I thought you guys didn’t party anymore. Well, it turns out the had not been or had not done so for a long while but since this is the weekend of the annual — what you would call — BLOCK PARTY—held in Downtown Hilo, they were going to have a little party of their own and they invited me.

The three of us had a very nice time. Lawrence drank beer. His “wife” David — they got married on the 5th of May, this year — was only drinking Soda because he was on medication that evening. But he says that if he plans ahead and only takes his morning ones, he can drink at night. Maybe one or two. Anyway, and then there was ME.

All of a sudden, Lawrence told David to go in the kitchen and to make me a Rum and Coke and put in a cup and bring it out. And that is what David did. And while David was making it for me, Lawrence suddenly realized that he hadn’t even bothered to ask me if I wanted one.

I told Lawrence it was fine. Especially since he was kind enough to remember that hardly drink beer but things like RUM AND COKE and VODKA AND COKE, yeah. Even David said that when he drinks RUM and Coke is what he drinks. And he makes them REALLY STRONG too.

I had two. And it took me all night to drink them. I drank them real slow cause we talked a lot. Part of it was serious but most of it was fun and we listened to music. Songs from the 1970’s and 1980’s. It was really great to remember those.

Because tonight is the night of the annual BLOCK PARTY in Downtown Hilo, I am not sure whether there will be another party here tonight or not. But I am sure glad we had one last night. It has been a real long time since I have been relaxed enough to feel almost no arthritis pain anywhere.

I COULD DO WITHOUT THAT!

And to think that, good naturedly last night, one of the first questions Lawrence asked me was: Have you made 70 yet? Not yet, I said. Lawrence, is 64. David is 34. My 70 is coming next year in 2019. Could it be that they are planning something???

I guess I will have to wait and see.

In the meantime, I hope there will be plenty of PARTYING to do this Autumn ( and Winter too). And I hope all of you will enjoy YOUR partying time when it comes!

PARTY BIG ! And please remember me and have some FUN for me, when you do!

HAVE A STELLAR AUTUMN EVERYONE!

Best Wishes To ALL of You!
From Your Dear Friend,
Mary Ann-san 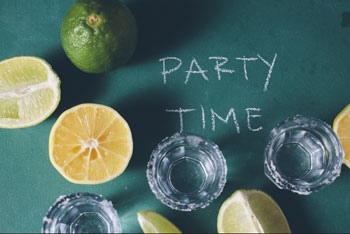