TO ALL OF MY WONDERFUL AND ADORING BLOGGING FANS IN CHIBA-KEN AND ALL OVER JAPAN !!!

Here we are all together once again and it is now August. Late Summer. And I am taking everything in stride as it comes and trying to be full of happiness as the Summer and Hurricane Season moves along. After having super heat, things started cooling down here. It rained the other day which prevented me from trying to make an attempt to “escape” from here and from being “House Bound” and get out. It is not easy being like this. But for now, this is the way it is. Like the people say: It is what it is. So, for a while I guess I am stuck. But hopefully soon, I shall get out and have some fun. And in the meantime, you can read Blog #125. Part 7. Please do enjoy.

When I first arrived here, that is Hilo, everything was all new and I was not yet sure WHERE I was going to go because I had nothing. Just what I had brought. I wound up staying at a hotel on Banyan Drive where all the tourists were even though I was already a LOCAL sort of, but not really yet.

As the days went by, I was still scared cause I thought any minute my husband would appear coming over from Oahu and would find me and that would be the end of me. I mean, if I could get on a plane and fly over here, most certainly, he could too. That is what I thought. Also I already thought of myself a single even though I still had to get the divorce from DKM. That alone would take some time and not knowing my way around Hilo yet, I did not know where to go to ask for that kind of assistance.

Then one day, when I was out and about I met a man who was staying at a Community House. His name was Steven. (He is now deceased and has been for quite a while). I wound up telling him my story, what there was to tell, and he invited me to come to the house and stay. He helped me check out of the hotel and soon I was at the Community House. (A Community House is where a bunch of people stay who aren’t related but share the house renting rooms and sharing the kitchen.). I also told Steven that I was seeking a divorce from my husband but did not know where to go to get one. He suggested LEGAL AID and he told me where to go and who I should talk to.

Then came the big thing. This “Princess” (me), was in need of a JOB. What money I had would not last. I had to find work. My big question was : WHERE ?

Steven came to my aid again.

He said his boss was hiring at the Papaya Packing Plant he worked at and he would get me an application. I said great.

And in the meantime while waiting I went to the LEGAL AID to see what I had to do to get my divorce from DKM. It was simple, the man said, he just needed the money so my husband could be served with THE PAPERS. I told him my husband was on Oahu. That did not seem to bother the man I spoke with at all. So, I gave him the money. (Ten dollars). And I just had to wait.

As it turned out they didn’t find DKM right away, couldn’t find him and so to look some more cost me another five dollars..

As I was saying, it cost me another five dollars for the people of the Legal Aid to continue in their search to find DKM on Oahu and serve him with the Divorce Papers. This time I did not have to wait as long before I heard from the Legal Aid saying their search was successful and DKM had been served THE PAPERS. My worry now was when I finally went to court would my now soon-to-be ex-husband, DKM, show up at the court? The man I spoke with doubted it. Things would okay he said. Don’t worry.

So now, it was once again wait some more. That was okay of course because right then I had nothing better to do.

The wait I did this time was not as long because while I waited the application which Steven gave me from the Papaya Place was then filled out and Steven took me down there for an interview with the Lady Boss while Steven went to work.

The Lady Boss whose name was: Lily Arakawa (now deceased) invited me to sit in her office and the interview began. I told her what she wanted to know. I told I was looking for a job and Steven suggested here. Then we got down to the part about packing the papayas. Did I have any experience? No, I said, I did not. (How do you explain to a person you never had a job before???? WOW.). But I can learn I said.

Lily looked at me doubtfully.

THEN: Almost without thinking I said boldly: Surely, Mrs. Arakawa, long ago before you became a Boss, you must have had a first day on a job somewhere and someone took a chance on you?

Right after that, I longed super big to take the words back and stuff them back into my mouth where they belonged. What I said took a lot of boldness and guts.

There was a silence. A long one.

Then Lily smiled. And said, I was right.

I got the job! I was hired! I couldn’t wait to tell Steven!! What better Birthday could I have gotten that year???

At that time, the Papaya Plant was called: ALOHA PAPAYA. Much later on, DEL MONTE bought out the company and I stayed on until they finally shut down and I went to work for another papaya place called MR. PAPAYA where I stayed for six years until my Tony got sick with his Cancer. Then I had to quit.

But it was while I was working the papayas that I got my divorce from DKM, moved from the Community House to a one room place in Downtown Hilo where I met my Tony. By then, I was age 26 and my Tony was going on 58 and it was the 3rd of October, 1975, when we met.

MY NEW LIFE HAD BEGUN IN A REALLY BIG WAY !!!
Part 8 next weekend. 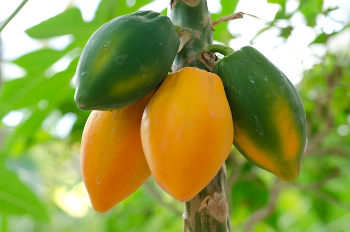