TO ALL MY CARING READERS IN CHIBA-KEN AND ALL OF JAPAN !!!

It is I at last, your Mary Ann-san. Another week has passed and I shall give you a tiny hint about this week’s Blog. But only a TINY one. Still, hopefully even this will make you all happy. I can hear you all going: YAY! now.

The hard part is done for now. Well, at least for me. With this Blog, things will get better. But as you all have read, I sure had to fight big to get to and arrive at this point.

The year is now 1975 and it is the 3rd of October and I am living a one-room place. Not even an apartment yet. One room. In a place called: The Cunningham Building. That is it. My room is # 1. It is a very, very, very, hot day and it is 96 degrees and I have just gotten home from my work at Aloha Papaya having walked the entire way which is about 3 miles one-way or so. Along the way, cars stopped wanting to give a lift but I politely declined every one because I learned NEVER to get into a car with someone I did not know. Had it been a friend offering me a ride home, I would have gladly taken it. Okay. Yeah. I know what you are all thinking right now.

How come none of your papaya co-workers offered to take you home and save you the big long walk on such a hot day?

The best way to answer that question I guess, is to say that, even though I worked with them all, I was not a part of them. I was THE OUTCAST. THE TOKEN WHITE as it were. This is something I would always be and there would be no changing it. And oh, I can also hear you saying, couldn’t I have gotten a ride from Steven? Yeah. Well. We did not work the same hours. He came earlier and left later. So I had no choice but to walk.

Now as I said, I had just gotten home. And you had better believe I was dying for water so when I got to my room, the first thing I did, was to grab my little red plastic glass and my keys and head down the hall to the shower room to get some water that I knew would be cold enough for me to drink cause the water in my room was not.

I was about half-way down the hall, when I happened to notice an open door and partly opened covering of material fabric that was colored like a rainbow. Now normally I would have just passed and went on, but since the door was wide open as I passed, and I was still holding my plastic glass, I looked in. At the exact moment, the man inside, looked up and saw me.

He saw my glass too.

He smiled and asked me if I wanted a glass of ice-water. With the temperature at 96 degrees, I wasn’t about to say no.

Like my room, he had no icebox. But he had an ice chest with ice in it. In fact, I discovered, he had two. One for food and one for the ice-water.

I took the ice-water gladly.

And wound up staying for Supper.

My Tony was 5’8”, approximately 207 pounds, (I weighed 160), had a full head of gorgeous gray hair and blue eyes one could die for. When I saw him, I just melted. I guess you could say, I fell for him instantly. He was also retired from the Army I would find out a bit later. He retired in 1960.

Because this Supper took so long to make, we finally ate at 10:00 pm, at night .(22:00 for you). Afterwards, I did not want to leave, so I took a shower down the hall and then did something I thought I would never do. I spent the night with him.

I know that there will never be another man like him. And I am SO VERY GRATEFUL that he came into my life when he did. I miss him so much now. And I wish he were still here. 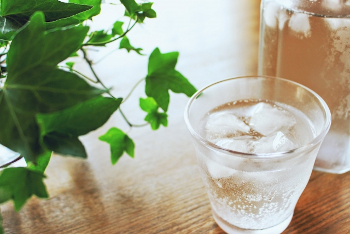