To All My Dear Readers In Japan. Hello Everyone! This is my third Blog article and I thought the title of THE THIRD LANGUAGE would be the perfect title for it. Oh…..maybe I should have said: Purrfect because this blog has to do with cats. Happy Reading!

ANYONE who has a cat (and I have had several during my lifetime so far because I grew up with them) or cats for that matter knows that their special beloved pets know at least two languages. Their “Mother” Cat tongue and the language of the home of their beloved human or favorite person where they live. be that language Japanese, English, or whatever.

TO be perfectly honest, I did not learn about the third cat language until later in life when I lived here in Hilo with my first family of three cats, none of which were related. All three of these cats are now gone to CAT HEAVEN. My first was: Princess (a tuxedo girl cat): Born in 1994 and died in 2003. My second cat was a BEAUTIFUL Blue-Point Himalayan who was born in 1995 and died in 2007. I named her: GAI-JIN. My third cat in this little family was born in 1997 and he died in 2014 at the age of 16, four months before his 17th birthday. His name was Crichton (named after the late author). And it was from my Gai-Jin and Crichton, that I learned about the third language.

MY Crichton gave away the big secret to me one night when were going to bed. It was when I said : Good Night to Crichton as usual when he did not respond like he always did. No Kitty Kisses for me that night or for that matter for the next several nights and I could not figure out what was going on because Crichton always gave me a Kitty Kiss good night and then went to sleep on my bed.

THEN I began to notice how close my Crichton and my Gai-Jin were becoming. It seems my little kitty girl Gai-Jin had “adopted” my Crichton as her own and was teaching him the language of the house where is had been born before she came to me. My Gai-Jin (yes, I named her that) was born in a Japanese Household and so it seemed she was teaching him to speak the language she first knew! And this is how I learned about The Third Language. And every so often after this, especially when I said Good Night to Crichton I had to speak to him in what little Japanese I know. Once I did that, I got my nightly Kitty Kisses back before bed.

WHEN my Gai-Jin went to Cat Heaven (Princess was already there), my dear Crichton was heart-broken, He loved his “adopted” Momma Gai-Jin and missed her very much. And I can not blame him. I love all cats but I would give anything if I could have another Himalayan like my Gai-Jin.

NOW after several other cats, I have the one I have now. This one is a Tuxedo boy cat whom I named PAWS. Born on the 4th of October, in 2010, he has been with me almost 7 years.

I HOPE you enjoyed his blog. And if you are wondering if this third language thing applies to DOGS or other kinds of pets……well…….lets just say, I do not see why it couldn’t. Good luck in trying to find out!

UNTIL NEXT TIME………
Mary Ann-san
(Written in HIlo on The Big Island of Hawaii on the Island’s East Coast where I still read and write and have LOTS of fun!) 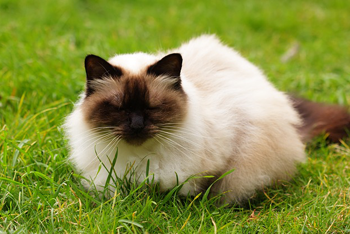