THE VOLCANO AND US !!!!! （キラウエア火山の噴火と住民）「あぜりあ」本八幡・西船橋・津田沼・佐倉

TO MY MOST LOVING, BUT WORRIED, BLOGGING READERS IN JAPAN!!

Hello Everyone! It is Mary Ann-san! You are getting a second Blog this week. For this, my thanks goes out to my friend, Hitomi-san who was kind enough to make a special request. She asked me to write about The Volcano and so I am here to do the best I can and answer it for all of you because I understand that you are worried. I understand completely because no doubt some of you may have friends or maybe even family here. So, here we go.

The Volcano here is a big thing. I mean really big. It is a big attraction. People come from all over the world to see our Volcano here whether it is in eruption phase or not.

When I came to the islands on vacation a long time ago, not knowing yet, but hoping, that I would come back to stay, I too, like a lot of tourists visited The Big Island and came to Hawaii National Park to see the Volcano. It was sleeping then. But still, it was an awesome sight to behold.

The same year I came for my vacation, I also returned. But even so, it would be four years before I would move to The Big Island, and make Hilo my permanent home. Little did I know, that nine years later,, in 1983, the Volcano would begin an on-going eruption that would be talked about all over the world.

What we are going through here now is totally different. At least I personally think it is. Since I live in Hilo-town and like about some 29 or so miles away from the Volcano, when I hear about the Volcano erupting, I find myself not being too worried because of the distance between myself and the happening.

What changed things for your Mary Ann-san this time was the 6.9 earthquake and the aftershocks that came along with it when the Volcano began erupting. Talk about being SCARED , yes, I was, SCARED BIG. I had never been involved in a earthquake SO BIG. Who would have thought a Volcano could do something, cause something as HUGE as that. Even my cat PAWS was shaken up and was upset.

In Hilo-town now, things have calmed down for now.

Closer to where the Volcano is however, that is not the case. Things are still happening. I have a good friend who lives in Puna. Her name is Charlotte Collard and she calls me daily and gives me updates with regard to what is happening Volcano-wise so I am giving her credit here with her assistance in the matter of this one Blog. She is my information source so my thanks goes out to her.

From what I understand, and have heard and been told, and sometimes have read, with regard to The Volcano, people have lost their homes, their jobs, their pets. A lot people have been displaced and have moved to shelters—all three of which are pet-friendly. They have cats, dogs, etc there. The big animals are out where our zoo is and they are being taken care of there. There are also people who are displaced who have been taken in by others and are living with them. Others have left the island and have moved to the Mainland part of the U.S. because they have lost everything and they have no other choice.

All these people are in our prayers.

Also because of this happening, there is very little tourist trade so businesses are lost and are closing and people who own them are moving to The Mainland.

As of this morning the lava flow was going into the ocean and creating hydro chloride acid which can harm eyes, nose, skin, and lungs.

This is the news Volcano-wise up to now.

Aloha Until My Next Blog!
From: Your Mary Ann-san 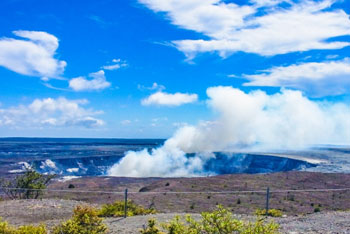